THE PUBLIC HAS THE RIGHT TO BE LISTENED TO

I happen to believe the BBC were right in allowing Nick Griffin on to the Question Time programmre last night and had they barred him from taking part it would have been another serious nail in the coffin for our democracy. Just because you don't agree with a person's views is not sufficient to gag them from speaking. I watched the programme with a keen interest but I was angered by the way it appeared to have be stage managed. Earlier in the day I had listened to John Prescott talking on Radio 5 when he claimed that the guests had prior knowledge of the questions that would be asked and that the 'invited' audience were 'plants'. I think he is probably right and Dimbleby went down in my estimation for his biased views and poor handling of the programme.

Read more »
Posted by Robert Bluffield at 15:23 No comments:

WHEN WILL MPs ADMIT THEY HAVE FLEECED THE PUBLIC?

The issues over MPs expenses exposed by the Daily Telegraph earlier this year are unlikely to die down following the independent inquiry by Sir Thomas Legg. It appears public confidence in those charged with the affairs of running our country will continue to diminish because many Members of Parliament, especially those within the Government, still refuse to admit the errors of their ways. It looks likely that a large number of MPs will either resign or be forced to stand down by their constituents at the next election.

Read more »
Posted by Robert Bluffield at 00:19 No comments: 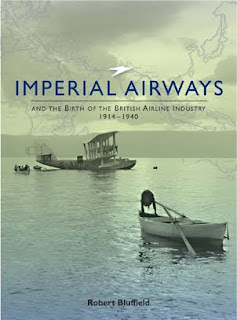 My latest book was released in the UK on 1 October and is due forworld wide release in December.

'Imperial Airways - The Birth of the British Airline Industry 1914-1940' is published by Ian Allan.

Imperial Airways is a name redolent of the excitement and glamour of the pioneering years of flight. Founded in the 1920s, Imperial Airways flew to destinations all over the world. This beautiful and evocative book on the 'golden age' of passenger flight is the result of years of research, and the text is complemented by a wealth of stunning photographs and ephemera. It is the most definitive book published on the history of Imperial Airways and the formative years of British commercial aviation. The book begins immediately following World War I with the pioneering companies - Air Transport & Travel Ltd (AT&T), Instone, Handley Page, Daimler Airways and others - and shows how, after AT&T's demise, the remaining three companies were brought together in 1924 to form Imperial Airways. The company continued through difficult times, political uncertainties and fierce competition to open routes to India, South Africa and beyond. This was achieved through the untiring efforts of colorful characters such as Sir Sefton Brancker, Herbert Brackley, George Woods Humphery, Sir Eric Geddes and an array of often eccentric pilots such as one-eyed Ray Hinchliffe and 'All-Weather Mac' Robert McIntosh. The book covers all the various different types of aircraft flying at the time. Often out-of-date and, on occasions, considered to be dangerous, the companies maintained a level of safety and reliability that was sometimes against all the odds. This is especially true considering the lack of navigational aids and other equipment that was available. The story continues with the arrival of the legendary HP 42 airliner, the era of the great flying boats and the experimental 'Mercury-Maia' project when routes across the continents were opened to link the British Empire to the motherland during the period between the two wars. The work also covers the important role that Croydon Airport played in the history of commercial aviation. The story concludes in 1940 with the formation of BOAC. This is an intriguing story that represents a journey through time when it could take more than a week to travel by flying boat between Australia and the UK and when passengers flying the near East routes would stay the night at remote desert forts en-route for India.

Posted by Robert Bluffield at 16:21 No comments:

I have recently had the pleasure of eating in two excellent pub restaurants that I recommend you check out. I have deliberately kept my comments short and suggest that you click on the links below to view the web sites of these two inns and to discover about their menus.

The first is The Lord Nelson a delightful 18th century country inn located in the small Oxfordshire village of Brightwell Baldwin near Wallington and is run by Carole and Roger Shippey. The menu is varied; the food excellent and the ambience superb. The hostelry is open all day on Sundays (for Sunday lunch/dinner) but I suggest you book early to avoid disappointment.

The other is the Bell Inn at Beechampton, a recently refurbished village inn nr Stoney Stratford, Milton Keynes. As this is a free house it offers a wide variety of excellent ales and an exceptional wine list that is interesting and varied. Excellent food is served in two cosy dining rooms. I thoroughly recommend that you try their traditional Sunday roasts or treat yourself to their succulent steaks (specials on Tuesday Steak Nights).

Posted by Robert Bluffield at 15:55 No comments: