HAVING FUN WITH THE LEMURS OF WOBURN 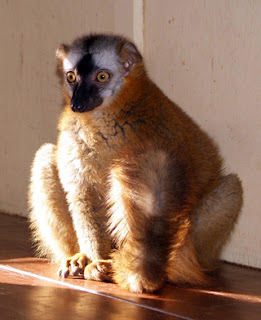 Watching the BBC’s excellent Madagascar programme the other day reminded me of a visit a couple of years ago to Woburn Safari Park with a friend of mine who was making a film for the Bedford Estates. Part of this involved visiting the Lemurs. We were assured by the keeper that these sociable animals posed us no threats. Nevertheless we entered their enclosure with trepidation but we soon were made welcome by these interesting animals and within moments one had decided to jump onto my shoulder and proceeded to sit on my head. They really are the most amazing creatures, full of character and extremely inquisitive. 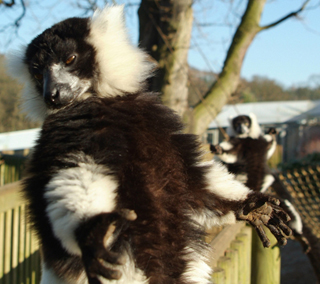 We spent a good hour with these wonderful primates and they seemed to enjoy our company as they continued to climb on us and sit on our arms, legs and shoulders. But, as soon as the sun made a break through the winter haze they started to line up, outstretch their arms in unison as if performing some kind of ritual, and lap up the rays. Getting to know Woburn’s various kinds of lemur was a fascinating and rewarding experience.
Posted by Robert Bluffield at 18:20 No comments:

ORANGE MUST TAKE THE BISCUIT FOR DIABOLICAL CUSTOMER SERVICE

I am at the end of my tether with Orange. Over the last few days I have been unable to receive any emails on my Broadband setup and I understand others are experiencing the same problem. This is the latest in a whole catalogue of complaints I have made to Orange over faults with their system over the last six months but it is difficult to move my service provider because I have to change so many resources including my Blackberry that are used to promote my email address. Last year the system kept emptying my inbox of all mail and then in their wisdom Orange has told me that I am on a 'pay as I go' account and, despite a week long exchange of emails, this still has not been resolved.
Calling the help line is a thorough waste of time and effort and I can feel my blood pressure rising.  If you call from a landline or mobile it can be expensive to boot just to get Orange to provide the service I am paying for. The call centre ... guess what ... is in India and without being accused of causing a racial issue, I have found that many of the operatives are extremely difficult to understand. Although I have been aware of other subscribers that are experiencing the same email problems, nobody at Orange is prepared to admit that anything is wrong. I have been told they will take 3-5 days to investigate the problem that they are not admitting exists, and when I explain that having no emails is like losing a limb they merely repeat over and over 'that they will investigate in the next 3-5 days' as if it had become their mantra. Yesterday I was prompted to ask whether I was actually talking to a person or robot, but the call centre operative missed the point and now, as we roll into the third day I am receiving spasmodic batches of emails during parts of the morning, things come to a grinding halt during the afternoon.  Now that the weekend is here I guess I will not even get this barrage of day-old correspondence.
I have resorted to writing several emails a day to customer support (now that is a joke!) using my msn connection but it takes the a day or more for Orange to respond and then all they will tell me is that they either have no record of my account (I had inherited Orange after Freeserve was taken over) or the engineers will be looking into the problem. As the same person never deals with an issue, for much of the time you have to go over what you have said previously.  I have written several letters to their CEO who hides behind his customer relations team, who delight in saying that the CEO does not read customer letters. Well he bloody well should as he might discover just how diabolical his company's customer service is.
It is all extremely unsatisfactory and frustrating and in the end I guess I will have no alternative but to change service provider with all the inherent problems that will entail.
If anyone out there can recommend a reliable email provider please let me know.
Posted by Robert Bluffield at 15:51 No comments:

THE JOYS OF BARTER

Bartering has been around ever since man began trading and despite an in-bred scepticism in the UK it can be a much more satisfying way of doing business especially when money is tight. I enjoy bartering and use it extensively to obtain goods and services that I need. It is a particularly useful way of doing business during periods when cash trade is scarce or you have excess capacity or stock that you want to shift. With the advent of the internet, most countries now have an organised barter trading system and mega businesses, even governments are not averse to trading in this way. I once worked for a client in the construction industry who regularly took payment for their projects in Nigeria with tankers of crude oil in place of hard cash, and this was later sold on to one of the major oil companies.
Communities have grown using the bartering system with various levels of success on a local level, but by far the most successful bartering organisation is Bartercard, an international trading portal that operates in six countries and has 75,000 trading members. Bartercard simplifies the trading process by matching the requirements of members to appropriate suppliers of products and services from within the membership. Payment is conducted using Trade pounds; thus when I make a sale payment for my services will be credited to my account and this can be used to pay for anything I buy from other member businesses. This means when I want to eat out, stay at a hotel, buy items that I need - even pay for my private dental treatment, I pay using Trade Pounds instead of spending cash. Bartercard makes its money by charging fees on every transaction but these are tiny compared to the equivalent cash spend you would otherwise make. It is a great way of doing business and it is all 'above board' - with members paying tax and collecting VAT on transactions in the normal way. Being a Bartercard member also acts as a great form of social networking that forges firm friendships and working relationships with other businesses.
The only downsides are that you cannot buy fuel, or use Bartercard to buy food in the supermarkets but it is something the major companies should consider. The reserved nature of the Brits still casts a suspicion over anything innovative that can really help their businesses. But it really is time that all businesses woke up to the benefits Bartercard has to offer as an alternative to paying for everything in cash.

Recession tips for businesses
Why you should join Bartercard
Latest investment using Trade
Posted by Robert Bluffield at 13:11 No comments: