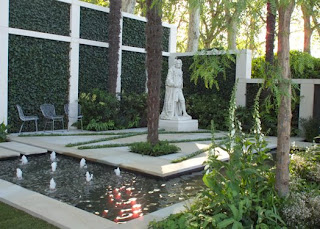 “Chelsea is always guaranteed to delight … there’s plenty to absorb everyone … from avid gardener to the pure novice.”


The problem with all of the RHS garden shows is that there are so many positive aspects and it is only possible to skim the surface in a feature of this length. Chelsea is the major international show piece of its kind and even if you only have a passing interest in gardens and flora, you cannot help being thoroughly engaged by its content. This year the weather was a great deal kinder than last and exhibitors reported that the conditions were ideal for planting and building their show gardens. This was the 86th RHS Flower Show to be held on the site of the Royal Hospital since 1913 and the popularity forced the organisers to announce quite early that all tickets had been sold and 157,000 visitors were expected to attend during the five days of the event. Despite this I couldn’t help feeling there was something slightly lacking from the usual air of expectancy that usually surrounds the occasion that I could only attribute to a knock-on effect caused by the depressing economic situation.


Sadly there was a notable absence of the popular presenter of BBC gardening shows, Monty Don who had been forced to give up his role after suffering from a recent stroke. I didn’t see that former doyen of the BBC’s ‘Ground Force’ programme Charlie Dimmock either. It seems she has fallen from favour with the BEEB. Press day generally brings a plethora of celebrity guests but there seemed fewer than at previous shows. Those that did make an appearance included Damon Hill, Chris Tarrant, Ringo Starr and his wife Barbara Bach, Felicity Kendal, Michael Portillo, Anneka Rice, Sir Patrick Moore, Brian May and Susan Hampshire. The Queen and other members of the Royal Family did attend later in the day but by the time they arrived the least humble members of the press corps had to vacate the show site.

The large show gardens are always the main attraction and they usually offer something very special on a grand scale. The smaller gardens are also painstakingly put together and are no less impressive even though they are built to much lower budgets. This year there was a distinct indication that the concepts had moved back to basics with strong geometric design and lush planting coming to the fore. Green was by far the theme; not so much as an environmental issue, but as the predominant colour that ranged across the majority of the 21 show gardens. Wild grasses, hostas, tropical palms ferns, perennials, trees and hedges were plentiful and the designers appeared to have adopted peace and calm as their overall themes. One exception was the Oceânic Garden (Bronze winner) by Diarmuid Gavin who had joined forces with Sir Terrence Conran with a flamboyant design that centred on an open sided timber and metal pavilion, complete with espresso machine, overlooking a garden shaded by canopy of mesh and metal daisies. Bamboos, ferns and dicksonias formed jungle style borders around meandering paths and lollipop shaped trees that formed the backdrop. I have the feeling that Diarmuid never quite wins the full approval of the judges, even though Chris Beardshaw had, in a sense gone from poacher to gamekeeper by moving from designer/exhibitor to join the team of judges.

The therapeutic qualities and joy that pleasant gardens can bring to the sick and infirm were evident. The BUPA Garden (Gold) by Cleve West featured plants of medicinal qualities in a tranquil design with a claming water feature that reflected the specific needs of those suffering from dementia and Altzheimers. Similarly the Cancer Research Garden (Gold) by Andy Sturgeon was devised to highlight the progress being made in the fight against cancer by deploying a peaceful design that suggested a journey through different periods in time. The garden contained four reflective pools that became progressively larger towards the front of the garden with Southern beech and large tree ferns planted to provide an exotic woodland setting that formed a series of delightful peaceful glades with orange blue and purple flowering plants brought in to add a brightening element of colour.

The Laurent-Perrier Garden (Gold) by Tom Stuart-Smith was judged Best in Show with a design that was surrealistic in nature that relied on juxtaposing brick-shaped objects around meandering paths arranged in one direction with a random pattern of planting that included a grove of magnificent thirty year old hornbeams that created the effect of floating clouds. Zinc panels on the rear wall and hand-crafted water troughs also of zinc were used to enhance and to break up the strong green by introducing a contrasting shade of blue-grey.

The Cadogan Estates Garden (Gold) designed by Robert Myers reflected how a hotter, warmer London climate of the future might alter the way formal community garden squares are perceived. This used a double canopy of lofty palms to create dappled shade above a layout of York stone paths, a piazza and two parallel canals linked by irrigation streams of harvested rainwater. This created an air of cool calm in a garden that was envisaged to be set among tall buildings. At the rear, a statue of the Cadogan Estate founder, Sir Hans Sloane, proudly overlooked a small terrace while a high feature sculpted from stone and hedges formed the back wall of the garden

Water played a major part in so many of the designs this year and a Far Eastern influence prevailed in several gardens. The Ky Wong Charitable Trust highlighted the cultural links between China and Europe in a creation that they called ‘I Dream, I Seek My Garden’ (Gold) that relied on the imaginative idea of a partly submerged Chinese pavilion and garden being discovered beneath the London soil. Shao Fan is a well respected artist famous for developing old and new Chinese art forms and his garden was an evoking combination of hand crafted wooden buildings, limestone rocks, water and indigenous Chinese plants.

Arabella Lennox-Boyd created a stimulating water garden for the Daily Telegraph (Gold) that achieved tranquillity by tastefully combining an extensive water feature with large slate rocks set in a border of Purbeck stone and slate mulch with a winding path also of slate. A trimmed line of yew bordered the edge of the garden to compliment the colours reflected in the pool as did the strong foliage at the rear of the garden. The ‘Garden in the Silver Moonlight’ (Silver) owed its influence to the Moon Observation Stage at the 17th century Katsua Imperial Villa in Kyoto with a garden devised to stimulate the five senses. This was the first time that contemporary Japanese show garden had been seen at Chelsea and it was devised Hank Ski and Makoto Saito to celebrate 150 years of cultural unity between Japan and the UK. Every year the popular Australians of Flemings Nurseries bring a crowd of personnel to construct their garden and to entertain visitors. ‘The Fleming’s and Trailfinders Australian Garden’ (Gold) this year was designed by Jamie Durie to provide a flavour of beach and bush. Australian plants and hardwoods were used around a wall of Western Australian sandstone constructed from 3,500 individual pieces. A dining area incorporating a central fire bowl ‘bar-b’ completed the impression of outdoor life in a hotter climate and the feature was adorned by an aboriginal hand-painted artwork by renowned artist Gabriella Possum Nungarrayi that enhanced this small vision of Australia.

The show sponsors, Marshalls called their showpiece ‘The Marshalls Garden That Kids Really Want’ (Silver) that used a theme of an organic playground devised to encourage children to play outside. Beyond the metre high stone sculptured snake that guarded the entrance, the garden opened into areas of bold, jungle style foliage that was used extensively and balanced with soft grasses and turf areas where children could play safely. A skimming pool, den and natural rock stack climbing area reached through an underground tunnel added to the overall adventure theme of a fun garden that youngsters were bound to find absorbing.

Chelsea is not only about the lavish show gardens that provide much of the acclaim. Overall there was plenty for everyone from the experienced gardener to the complete novice and the 250 trade stands offered a massive array of the newest and most fashionable garden products and services from tractors to clothing, books to sculptures, botanic wall art to greenhouses. Plenty of expert advice was also at hand for those in need. There were also numerous exciting designs to be seen in a new category to the show; urban gardens that featured outstanding design concepts for small gardens located in a modern urban setting. The 2008 show included no less than 22 of these small gardens; each of them unique and delightful in their own particular way. While the outdoor gardens displayed an abundance of green planting, the Great Pavilion was alive with a mass of outstanding displays of vibrantly coloured popular and less common garden plants, flowers, fruit, vegetables and miniature bonsai trees with features from places as far away as Jamaica, Barbados, Grenada and elsewhere proudly displaying their own indigenous flora. With the shows at Hampton Court and Tatton Park still to come, this looks like being another exciting year for the Royal Horticultural Society.

More information about Chelsea 2008 and the other shows can be found on the Web site:: www.rhs.org
Further photographs of this year’s event can also be seen by hitting the link on my web site at: www.robertbluffield.co.uk

Posted by Robert Bluffield at 11:14