THE PROMISE OF FAR EASTERN WINES

A few years ago I was privileged to be invited by Red Bull to a wine tasting at my favourite Thai restaurant, the impressive Blue Elephant in Fulham Broadway. It was organised to promote Monsoon Valley Wines that are produced in Thailand by the Siam Winery owned by Red Bull. Until then the thought of drinking wine made in Thailand went somewhat against the grain. But then, why should it? The winemaker had a fine French pedigree, and coincidentally had worked for a friend of mine, the wonderful chef Peter Chandler, owner of Paris House restaurant in Woburn who sadly died two years ago. 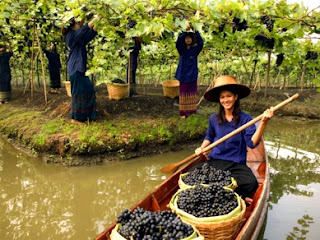 The extreme temperatures of the Thai climate means vines can be grown with a high concentration of fruit. These are produced in two areas; in the hills around the coastal town of Hua Hin and on floating vineyards near to Samut Sokorn, 30 miles from Bangkok, in the Chao Phraya Delta on the Gulf of Thailand. The local grape varieties are Malaga Blanc and Pokdum - the latter, when blended with Shiraz and Black Muscat produces an excellent red. The wines, produced by the Siam Winery, are not at all bad and are an admirable compliment to spicy Thai food.  The wines are available in many Thai restaurants and I suggest that you give them a try if you want to be suitably impressed.
This brings me conveniently to another story that I became aware of this week  with the announcement that Moët and Chandon has invested in 163 acres of farmland at Ningxia, a region of China located south of the Mongolian steppe and Gobi Desert.  This is one of the poorest areas of China but the renowned Champagne producers will be bring added benefits to the economy by planting Pino Noir and Chardonnay vines that will produce China's first traditional method sparkling wine. Wine experts have said that the terroir of Ningxia closely match that of Rheims, although the Yellow River flood plane is very different to the soft water of the Marne. The company has a purpose-built winery that is jointly owned with Ningxia Nongken a local state owned agriculture company. Planting is due to begin in April or May next year and the first wines will be ready in three years although they cannot be called Champagne as to lay claim to the name wines must be produced in this region of France.
The Chinese drink about one million bottles of Champagne a year despite it being heavily taxed and the overall consumption of wine in the country more than doubled between 2005 and 2009 to over one billion bottles a year. Once available, the local brand will allow more Chinese to enjoy a quality sparkling wine and Moët believes that it will encourage new drinkers to progress through the range of sparkling wines to eventually invest in Champagne.
Posted by Robert Bluffield at 19:07