Along with other sports lovers everywhere I was saddened to learn of the death of Severiano Ballesteros at the age of just 54. He died from a brain tumour first diagnosed three-years ago. He was a terrific golfer, a professional's professional, and a truly great character. His passing will be a huge loss to golf and sport in general. 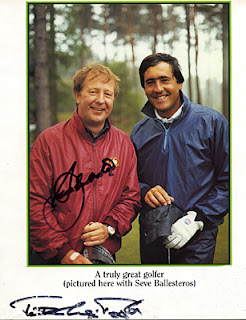 I have my own fond memories of Seve. From 1986-1994 I was the official photographer for Dunhill at the British Masters Golf tournament held at Woburn Golf & Country Club. I met him for the first time in 1986 in the tent assigned to my team on the 1st tee at the ProAm event that preceded the main tournament. Seve had been teamed with Tim Brooke-Taylor, the former Goodie, who was naturally apprehensive about how his golf might stand up to scrutiny playing in the same foursome as the great master. Tim had cut his hand while searching for a ball during his warm up on the practice ground and as my wife applied first-aid to his injury they were filmed by TV cameras causing Tim further trepidation. Seve won the Masters that year and returned several times more, winning again in 1991.
Report in Daily Telegraph
Tim Brooke-Taylor need not have worried. He told me later that Seve had been an amazing playing partner and had given advice and been extremely encouraging to his playing partners throughout the 18 holes giving them all a lot of confidence.
I had taken a photograph of Tim with Seve (seen here) before they teed-off and I was privileged when Tim asked if he could use this to illustrate the back cover of his book Tim Brooke-Taylor's Golf Bag. When the book was published in 1989, to mark the occasion I invited him to my studio after the ProAm event where I presented him with a framed canvas bonded print of the photograph. I was thrilled when he wrote to say that my photograph took pride of place above the fireplace at his Berkshire home.
Over the years Seve's command of English that seemed at first limited appeared to improve - sufficiently in fact to chastise me on one occasion for unthinkingly placing myself in his eye-line as he was about to make a vital putt. I got the rough end of his tongue but he was sufficiently gracious to exchange some pleasant banter about this after he had finished playing for the day. Despite a tiring round that had not completely gone his way, he generously gave his time before returning to his hotel to be photographed by me with a group of competition winners that had won tickets for the Masters. He didn't have to do this; and while others on the golf circuit may have refused, Seve was prepared to give his time to his fans.
As a photographer I worked with Seve on four or five occasions. I always found him easy going, polite and willing to share a joke off the course - but during the tournament, when concentrating, he could sometimes be feisty. But Seve Ballesteros was always thoroughly professional and he gained everybody's respect and was extremely well liked.  He has long been missed from the playing circuit but now, with his passing, marks the end of a legend.
Posted by Robert Bluffield at 19:39